What's the bunny got to do with Easter?

We explore the connection between bunnies and Easter.

The real ones can be cute, cuddly and with ears tall enough to pick up a radio station. But what is the connection between bunnies and Easter?

Indobase reveals the following facts about the Easter Bunny:

A symbol of Easter

Contrary to popular belief, the Easter Bunny is far from a fad. As a symbol of Easter, it is understood to come from the pagan festival of Eastre. The goddess, Eastre, was worshipped by the Anglo-Saxons through her earthly symbol, the rabbit.  According to ancient fertility lore, the hare and the rabbit were the most fertile animals known, serving as symbols of the new life during the spring season.

Apparently the Easter rabbit was introduced to American folklore by the German settlers who arrived in the Pennsylvania Dutch country during the 1700s. It was first mentioned in German writings in the 1500s.

Ancient paganism also has a special place for the hare as a sign of new life, owing to its high reproduction rate. Of course, with time, the original hare was replaced by the more well-known bunny. Whether used as a home decoration or made of chocolate and eaten, mouth-wateringly, to mark Easter, bunnies are a typical symbol of this special occasion.

Intriguingly, the first edible Easter bunnies were not made of chocolate but of pastry and sugar during the early 1800s in Germany.

A German tradition, followed in Texas, calls for burning of Easter-eve fires. It is said that these fires are actually made by the Easter Bunny who burns wildflowers to make his colourful decorative dyes. Germans of the early 15th century are said to have believed that hares laid eggs and, from there came the custom of Easter eggs. 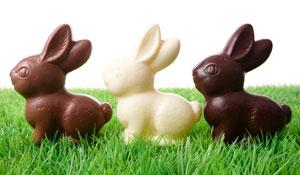 Easter bunnies are part of extravagant celebrations. In the US alone, 90 million chocolate bunnies are made for Easter each year. Now that's enough chocolate to make anyone's ears prick-up…

If you plan to make your own delicious treats you can find some great Easter recipe ideas from Sainsbury's.